This three layered model is the basic foundation for creating small and larger Networks. Using this we can design a hierarchical network with dividing the network into 3 different layers which also help us in reducing the network complexity. Today’s networks are complex and large, wide variety of technology, running multiple services and also having challenges with functionality, increasing demand of bandwidth and compatibility with other businesses and venders. So for designing large networks we need to have such hierarchical model for designing our network. 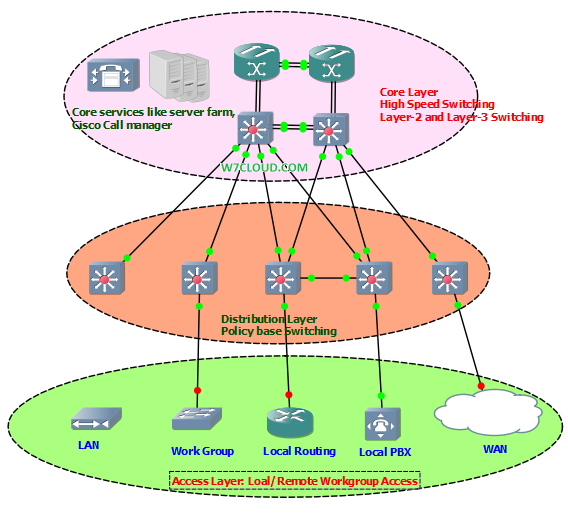 Core layer is the backbone layer of network running with high speed switching and transfers larger amount of data, also handle the requests of distribution layer. This layer has high Speed devices like high end routers and switches with large modules with layer-2 and layer-3 functionality.

Since core layer is the backbone of any network and providing services to other layers therefore this layer is reliable and have availability, also must be Redundant and have load balancing between its different links. Cisco recommends that Core layer should have mesh topology and there should be no stuff like ACL, packet handling etc.

Some of key characteristics of core-layer are as following:

In a Network the number of router hops from edge to edge is called the diameter, it is considered good practice to design for a consistent diameter within a hierarchical network.

Some of key characteristics of distribution-layer are as following: 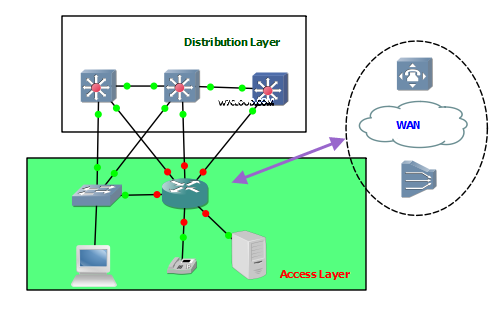 Some of key characteristics of access-layer are as following:

How to Configure Cisco Router with Configurations