One of the goals of remote-access network design is to provide a unified solution that allows for seamless connectivity to remote users. This article is about the providing remote access to users which are not in office, with this remote access these users may able to access their office’s network from home or from other offside location. The primary function of remote access is to provide access to your users to internal resources and applications. Because connection requirements drive the technology selection process, it is important that you analyze the application and network requirements in addition to reviewing the available service provider options. 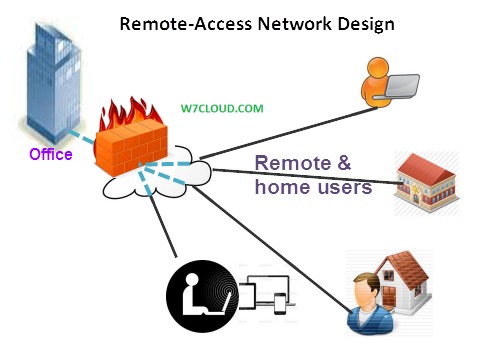 Remote-access network connections are enabled over permanent always-on connections or on-demand connections. Technologies include digital subscriber line (DSL), cable, wireless 802.11 a/b/g/n LAN, and 3G/4G wireless WAN (WWAN). However, these remote-access technologies might or might not be available, so it is best to check the availability for the location in your network design.

VPN is one of the best way to provide the remote access to your remote user. While providing the VPNs access to your customer to your office you can use the following three methods:

Overlay VPNs: this VPN overlay the customer existing point to point network, these VPNs are very common and simple to set up. Overlay VPN are point to point link and have virtual circuit (PVC) and normally these are low cost VPNs solutions.

VPDN’s: VPDN is the type of VPN which relay on security domain of the ISP, it uses the vendor’s dial-in solutions for private dialup connection so you can connect to the local service provide edge by using modem, ISDN etc then service provide pull all the traffic from their point of presence to customer own router. VPNs tunnel can be create with the Cisco L2F, PPTP and L2TP.

These VPNs use the MPLS, for more details you can review RFC 2547.

When you need to provide secure remote access using VPNs, you must consider several things. One key consideration is the use of enterprise VPNs or service provider based VPNs.

Here are some technology options that are available when selecting VPNs.

Here is a list of VPNs that can be found in enterprise environments:

Here is a list of VPNs that can be found with most SPs:

IPSec is a group of security protocols for encrypting IP packets between two hosts and thereby creating a secure tunnel. IPSec uses open standards and provides secure communication between peers to ensure data confidentiality, integrity, and authenticity through network layer encryption. IPSec VPNs are commonly configured between firewalls and routers that have IPSec features enabled.

DMVPN is a Cisco IOS solution for building IPsec + GRE VPNs in a dynamic and scalable manner.

Multipoint GRE (mGRE) is a single GRE interface, which provides support for multiple GRE, and IPSec tunnels to reduce the complexity and the size of the configuration.

Virtual tunnel interface (VTI) is a new IPsec VPN design option available in Cisco IOS software. VTI has some interesting advantages over previous IPsec design options, including support for dynamic routing protocols and IP multicast without using GRE or mGRE type interfaces. Also, VTI tunnels are assigned an unique interface, specific tunnel level features such as QoS can be configured for each tunnel separate from other VTI tunnels.

MPLS provide a fast method for transferring the packet in data network by assigning labels. MPLS can run on many L2 technologies, including ATM, Frame Relay, PPP, Packet over SONET (POS), and Ethernet.

The MPLS network distributes labels to each VPN.