How to design LAN:

LAN design or switching design are very important part of any Network and its play a very significant role in performance of network specially access-network. Technology is changing rapidly and specially layer-2 technology. This article is related to designing a switch network in best possible way and the things that you should have to consider while designing a Switching topology.  Following are some important area of basic switching design.

If you are beginner in Cisco switch configuration read this.

First we have to consider that our network is within a building or consist of multiple buildings/ Campuses.  We can divide our network into following geographical types:

A network Within a Building is called intra building networking. In this type of network we are dealing with single floor or multiple floor of a building. Normally all the devices like servers, PCs, printer are connected to central nodes with UTP or STP cables. Access points with wireless router as a central device can be used for wireless network. For intra-building networking our central device can be a multi-layer switch, UTP/STP cables are used for connecting our device with this Multi-layer switch and for fast switching we can use the fiber optic for creating connection with other building. 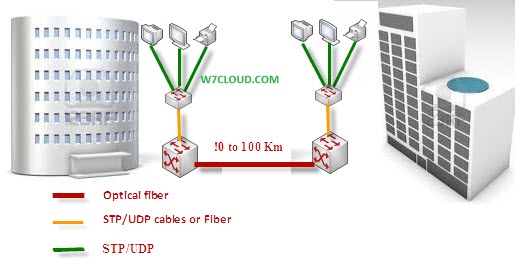 A network between multiple buildings is called the inter-building networking. Distance is a very important factor in deciding for physical media between the building and campuses. If your office building are less than 100 meters away from each other and also you don’t have large amount of traffic between two buildings then you can use STP or UDP cable. But for long distance and high speed data transfer, video/voice and other multimedia communication optical fiber is your best option. You can use a multi-layer switch with fiber module for connecting two buildings. You can use either single mode fiber or multi mode fiber according to your requirements. MM fiber supports high data rate but have less range where as you can use the single mode fiber up to 100KM.

For distant remote office that have more than 100km distance among them you can use the service provider network for connecting these remote offices using different technology and protocols. You can also use the microwave or satellite systems for connecting geographically distant offices.

Layer-2 technologies focus of layer-2 of OSI model that is called data-link layer. At layer-2 packets are transferring base on their MAC address or layer-2 header, L2 switches can perform layer-2 switching. While designing a switching network a network engineer have following three options to choose according to their requirements:

Layer-2 only: In such case you have all the layer-2 switches in your network like Cisco 2900 series switches.

Layer-3 only: throughout the layer-3 switches in the networks.

You can make the decision for choosing layer-2 or layer-3 switching by considering the following factors for network: