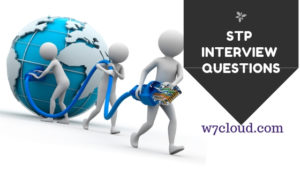 What is STP used for?

STP is stands for “Spanning Tree Protocol” and is a Layer-2 protocol that runs on bridges and switches. STP help you to avoid loops in networks and ensure that you do not create loops when you are creating redundant-paths in network. If there is a Loop in a network then it will results the stoppage of communication in networks.

Why do we need Spanning Tree Protocol?

The STP is a very useful protocol that is used to eliminate loops in Ethernet switched in LANs. STP avoids loops and related to network outage by blocking redundant-links across the network.  Also it makes the redundant links operational if the main link go down or fails.

What is Root Port in Spanning Tree Protocol?

IF A Switch with multiple paths to reach the Root-Bridge, it must select one path and the associated port as the Root-Port.

What are basic rules of Spanning Tree Protocol?

What is Difference between STP and RSTP?

RSTP (Rapid Spanning Tree Protocol) is much faster as compare to STP. It can complete a convergence in seconds. While the STP, convergence can take up to a minute or more to complete in a large-network. Which can results in the loss of connectivity between different parts of the network during convergence-process, and the subsequent lost of data-packets.   RSTP enables STP Root Ports and STP Designated Ports to change from the blocking to forwarding port state in a few seconds. while the STP follows 5 states to avoid loop in  network which are

What are the BPDUs in STP?

BPDUs (Bridge Protocol Data Units)  are the messages, which are the send by the each switch in network with information based on this assumption.  Because every switch in Ethernet network initially believes it’s the root-bridge, and switch sends-out spanning tree protocol configuration in form of  BPDUs messages. These BPDU-messages include the following info:

What is STP Path-Cost value for different bandwidth?

The STP Cost-Value is inversely proportional to bandwidth of the link and therefore a path with a low cost. Different values for different bandwidths are as following
10 Gbps = 2
1 Gbps = 4
100 Mbps = 19
10 Mbps = 100

Root port:  The root port is  port, which always has a link directly connected to root bridge, or the shortest path to the root bridge. It is always on Non-Root Bridge.
Forwarding port:  A port which forwarding  frames is known as forwarding  port.

What is Root Guard?

Root Guard is a interface feature used to protect the root-bridge. As you know that a switch with lowest bridge ID can become root bridge. So an attacker can add a such switch in your network & can disturb your network. But if a port enabled with root guard received a superior BPDU, it move the port into root inconsistent status thus maintaining the current root bridge,

Thank you for reading this. You can add STP Interview Questions, face by you in your interview in comments.